Jankara Winery was founded by Renato and Angela Spanu in 2006 when they decided to follow their dream and acquire vineyards in Gallura, Sardinia where Renato’s family is from. Today the winery has doubled in size, with 22 acres under vine. They work with renowned Italian winemaker Gianni Menotti.

After decades working in the wine business in the USA, Sardinian-born Renato Spanu and his wife Angela Spanu decided to branch out on their own and follow their dream of opening a winery. They went back to Renato’s roots in Gallura, Sardinia, where they found and quickly acquired 21 acres of untouched hillside terrain in the prestigious area of San Leonardo – the most sought-after area of the island for the cultivation of Vermentino grapes. They planted their first Vermentino vineyard in 2008.

The couple quickly brought on enologist Gianni Menotti, who was named Best Wine Maker of the Year by Bibenda in 2012.

The property is located between the towns of Luras and Sant’ Antonio di Gallura, near Lake Liscia in the highlands of Gallura. The prestigious sub-zone called Vena di San Leonardo runs from Lake Liscia to the territory around the minuscule, medieval country church of San Leonardo.

Within this vein Jankara’s Vermentino vineyards sit on the cru of Giannaghe, “Jannaca” in the local dialect, facing another historic cru called “Karana.” The names of the two crus were combined to create the winery’s name Jankara.

The unique Mediterranean climate is influenced by the vast lake and the island’s second-highest mountain, Limbara. Large fluctuations between day and nighttime temperatures help the grapes build strong aromatic properties. Constant winds in the area protect the vineyards from the scorching Sardinian heat, flying pests, and rot and disease, ensuring pristine health before the grapes ever hit the cellar. Crushed granite soils provide excellent drainage for the vines and contribute outstanding minerality to the wines. 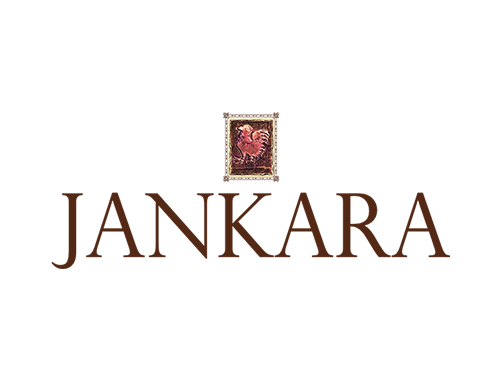